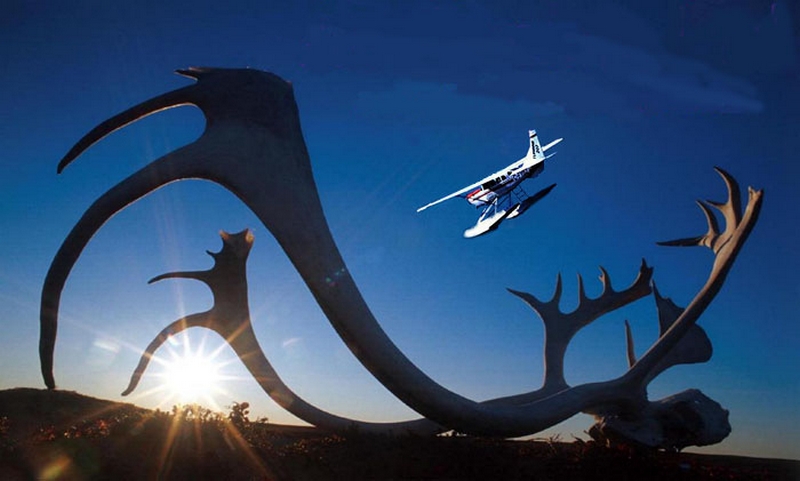 Beginning in 1972 and then carrying on to this day over four decades, our various enterprises have channeled several million tourism dollars into the Canadian Far North. We are proud that we have done so in a manner that has taken little away from the land, having barely depleting our natural resources; and leaving as little footprint as possible. Our highly ethical approach to tourism and land/water/resource use as we continue to play an instrumental role in the development of cultural & eco-tourism.

Our ongoing lobbying for the protection of wildlife and critical wildlife areas in the Canadian Arctic & sub-Arctic has also afforded us much-distinguished media attention & formal acknowledgments: This has helped bring notable nedia coverage and credibility to Northern tourism and its many conservation issues.

A list of our most notable media and guiding accomplishments over nearly four decades of remote mainland Arctic field operations is as follows:

-1975-77:  Great Canadian Wildlife Adventures (then Lynx Tundra Lodge) facilitated, guided & outfitted with watercraft  Dr. Bryan Gordon and his family & team for his extensive archeological dig in the upper Thelon area.  This resulted with acknowledgments in the educational archeological book ‘People of Sunlight-People of Starlight‘ [ISBN #0-660-15963-5}.

-1987: Commissioned by the Government of the NWT, Great Canadian Wildlife Adventures (then East Wind Arctic Tours) successfully organized, outfitted and led a special tour to the Thelon Sanctuary, Nahanni National Park and Wood Buffalo National Park for key members of the Canadian Consulate General, including the then Director General of External Affairs – Mr. Garrett Lambert.

-1990-91: We were formally recognized by the Canadian Green Consumer Guide as one of the top five  environmentally-conscious tourism operators in Canada [ISBN not available].

-1990-91: We became affiliated with the World Wildlife Fund Canada, by donating 25.00 per client booked on all of our trips, and carried the WWF panda logo on our literature for two years.

–1996: We successfully organized, guided and outfitted film producer John Howe from KUED-TV, an affiliate of PBS in Salt Lake City, Utah – resulting in production of & formal acknowledgment in the nature documentary ‘The Snow Wolves‘, aired on PBS in the USA in 1997.

–1998: By referral of some of our past clients – Great Canadian Wildlife Adventures was nominated and became a primary runner-up for the Conde Naste Ecotourism Award 1998.

-2000-01: We successfully organized, guided and outfitted Canadian author / writer Catherine Senecal to the summer caribou migration in the Thelon valley, resulting in two major publication articles published and released in the Michelin Press. Catherine Senecal then went on to win the prestigious ‘Canadian Travel Commission’s Northern Lights Award for Excellence in Travel Journalism’ for best Internet Reporting, for  her article titled ‘Tales of the Tundra: Exploring NW Canada’  published in the Specialty Travel Index.

-2001-02: We successfully organized, guided and outfitted author Alan Weisman & Pulitzer-prize winning photographer Jay Dickman for a two-week expedition to the Thelon, the NWT diamond fields & the native community of Lutsel K’e.  this expedition resulted in the feature magazine article ‘Diamonds in the Wild’ – as well as the editorial – published in the December 2001 issue of Conde Nast Traveler magazine.

-2002-03:  Great Canadian Wilderness was nominated by client & Yukon Northerner Dr. Dave Simonson for the World Wildlife Fund International Arctic Programme Arctic Award for Linking Tourism and Conservation. The initial nomination was then backed up by other nomination letters from client/author Alan Weisman and client/photographer Lonnie Brock.

-2003-04: We successfully organized, guided and outfitted Canadian author Courtney Milne for a two-week expedition to the upper Thelon area. This trip resulted in a feature magazine article ‘Journey into the Thelon’,  published in the March 2004 PhotoLife Magazine.

-2004:  Great Canadian successfully organized, facilitated & guided George Archibald and 15 key members of the International Crane Foundation from the US on a special ten-day tour that included – in conjunction with Brian Johns of the Canadian Wildlife Service – the whooping crane nesting area in Wood Buffalo National Park, the Upper Thelon & the Mackenzie Bison Sanctuary.

-2003-04: We successfully organized, guided & outfitted Canadian Cinematographer Jeff Turner of River Roads Films, on several expeditions over 2003 and 2004 to gather footage for a major BBC nature documentary titled ‘Caribou & Wolves – the Endless Dance’ that was aired in the US on Animal Planet, and in the UK on BBC2 on a series called “The Natural World“.

-2004:  Great Canadian successfully organized, facilitated & guided Annett Wolf of the Wolf Foundation of Copenhagen, Denmark to the upper Thelon for five weeks, to start her tabletop book leading to a major film production to be titled ‘The Final Chapter’.

-2006: For the second time, Great Canadian successfully organized, facilitated & guided George Archibald and 14 key members of the International Crane Foundation from the US on a special ten-day tour that included – in conjunction with Brain Johns of the Canadian Wildlife Service – the whooping crane nesting area in Wood Buffalo National Park, the Upper Thelon & the Mackenzie Bison Sanctuary.

-2008: Great Canadian organized & facilitated renowned author/photographer Vincent Munier of France to the Thelon country for two weeks in the autumn of 2008, to start his project for a National Geographic article about the Thelon Sanctuary, which will carry on in Nunavut in 2009.

-2008: Great Canadian successfully organized, facilitated & guided photographer Steve Barger and several other clients to the Thelon region between 1999 & 2005, of which 26 photos including the cover photo grace the just-released book titled ‘Caribou and the North – a Shared Future’.

-2010: On his second trip with us, Great Canadian successfully organized, facilitated & guided free-lance writer Martin Zeilig on our ‘Dance with Caribou’ Expedition in Nunavut, which resulted in a feature travel article titled Dancing with Caribou on the Treeless Plain,
published in the Winnipeg Free Press in May, 2010.

– 2011: After providing logistical insight and advice, ‘Tundra Tom’ was included as a character in a new fiction book: ‘Jesse & Cash and the Skeletons Stash‘, about the Thelon River and the NWT; written by US author Nancy Bjornson.