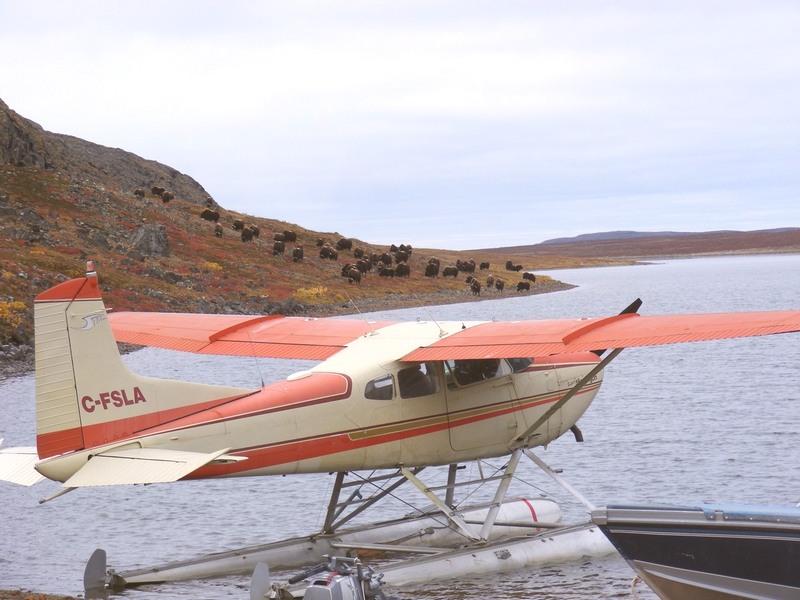 Of particular issue is the application of careful flying practices when using aircraft to locate and access remote wildlife: a method which is often a necessity when seeking out migratory wild animals over vast tracts of land such as the Canadian Arctic.

When doing so, considerate aviation methods should be applied, such as maintaining safe, legal and non-disturbing altitudes at all times. Specifically, an on-going minimum altitude of 500 ft AGL (above ground level); while at the same time avoiding direct or upwind fly-over of caribou or musk-oxen.

Pilots conducting wildlife-related flying should be experienced with a ‘seasoned eye’, or specifically and extensively trained by the operator to learn the ability to pick out wildlife on the landscape from a distance in order to avoid inadvertent disturbances.

Once wildlife is discovered by air at a non-disturbing distance, aircraft should immediately turn away and climb out to a higher altitude before attempting to get any closer or to fly over the animals.

If a direct flyover of animals is necessary, it should only be conducted from a recommended minimum altitude of 1500 AGL with single normally-aspirated engines, or 2000 AGL with twin and/or turbine aircraft due to the higher pitch of the sound emissions.

Since helicopters emit a deep ‘thumping’ noise that disturbs animals at most any altitude, they should not be use for airborne searches or for a flight over wildlife at all excpt a a minimum altitude of 2000 AGL or greater.

Aircraft should never be flown directly over sensitive areas such as caribou calving grounds or active water crossings at any time.

When any low-level flying is required such as for aerial photography, seeking out safe landing or beaching areas or while conducting search and rescue operations such maneuvering should always be conducted over water and not land if possible – and always downwind of any wildlife.

Once wildlife is discovered, the choices of where to land and to set up a camp must be carefully considered in order to minimize continued aircraft usage, which of course also makes the most sense for economical operations and to reduce carbon emissions.

The choice to land downwind and out of site – a minimum of 1/2 km away or more from any wildlife, and letting the animals come to you is always the best practice.

As a eco-tourism company, we practice daily environmentally-conscious field ethics that are intended to leave as little impact as possible to our surrounding environs.

This attitude is particularly important in sensitive Arctic and sub-Arctic regions where even just walking over the wrong area at the wrong time in the wrong manner may scar the land for hundreds of years.

Our camps, equipment & field techniques are operated in a low-impact manner, and we expect our guests to assist us in our endeavor to maintain purity on the land.

In 2003 & 2004, Great Canadian was proud to facilitate cinematographer Jeff Turner and crew of River Road Films to several wild wolf den sites, and to the Great Summer Caribou migration.

Jeff got some awesome footage – with several grizzlies coming in to a remote water crossing to feed in several caribou that were stuck in the boulders of a creek crossing.

During the spring of 2004, Jeff also got some quality wolf pup footage on the upper Thelon.

The documentary was relased in the US on Animal Planet and in the UK on BBC2 on a series called “The Natural World”. Jeff had this to say about his trips with us:

“I have filmed wolves, caribou, and grizzly bears in many areas of the Canadian Arctic over the past 15 years and I have to say that the area around [the Thelon River is without a doubt the most beautiful piece of Arctic tundra I have ever experienced.

It is a world class wilderness with some of the planets most spectacular scenery and wildlife that is hard if not impossible to see anywhere else. I know of no other place where you can go and watch wild wolves around their den.

Wolves are one of the most difficult animals to get close to in the wild and Tom and his crew have been doing it for years.

That says a lot about their sensitivity and success as wildlife guides.

Tom and his crew at Great Canadian Wildlife Adventures are ideally placed to give access to this wonderful landscape.

There is no-one with more experience and knowledge of the area and they have setup a comfortable, warm and homey camp with good food and facilities in the middle of this wilderness.

They live lightly on the land here trying always to keep the imprint of man to a minimum in this pristine place.

I admire and appreciate the work they do and wish them much success in the future.”